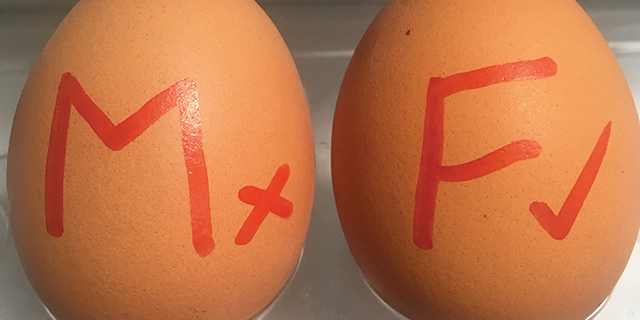 Along with this comes the egg industry killing off one-day-old male chicks because they serve no economic purpose. A recent article I read in the January issue 63 of the RSPCA’s always-informative and thought-provoking ‘Animal Welfare Science Update’ discussed the current developments in Germany and the three different methods to avoid killing male layer chicks.

The first is in ovo sex determination, which involves sexing the eggs using endocrinological or optical methods and destroying male embryos before hatching. This system is 98 percent accurate by the ninth day of incubation and commercially available in Germany. The second method involves using dual-purpose breeds, where hens from these lines lay a sufficient number of eggs, while the males have an acceptable fattening performance.

Using dual-purpose breeds allows females to be used for egg production and males to be fattened for meat production. However, these breeds will never achieve the high production rates of the specialised breeds and are not yet available on a commercial scale in Germany. The final method is rearing males of specialised egg production strains for meat production, something that is currently being employed by the organic sector as an interim method while dual-purpose breeds are developed, as in ovo sex determination is unacceptable to this sector.

The number of male layer chicks raised in Germany has increased from 100,000 per year in 2015 to 270,000 per year in 2018 and they take 8.5 to 18 weeks to reach a marketable weight. In terms of animal welfare, rearing male layers is largely unproblematic, with 89 percent of German consumers willing to pay more for eggs if the male chickens were raised.

According to RSPCA’s Science Update, while there are challenges in raising male chickens in a resource-friendly and ecologically sustainable manner, this practice shows how an industry can react to societal concerns immediately, before longer-term solutions are available for the entire system of modern poultry production.

The same edition shone a light on another chicken welfare issue: how the quality of artificial lighting enjoyed (or not) by indoor broiler chickens can influence behaviour and welfare. According to a UK study investigating the effect on broiler chicken welfare of providing artificial UVA and UVB light, providing UVA light, part of the UV spectrum, appears to make the environment more attractive, encouraging foraging activity and preening while reducing fearfulness and stress.

Though news to me, apparently chickens can see ultraviolet light that we can’t. The research, by James, Asher and Herbor, published last year in the journal ‘Applied Animal Behaviour Science’, also revealed that UVB light supports synthesis of vitamin D, which increases bone strength. In the study, 638 broiler chicks were randomly assigned to one of three lighting treatments: UVA light only for 18 hours a day; UVA and UVB light for eight hours a day; or standard LED light with no UV wavelengths (control).

The UVA plus UVB treatment needed to be limited to eight hours a day to avoid overexposing the birds to UVB. Each treatment group was housed in a separate room until 35 days old when the experiment ended. Three measures were used to assess the welfare of each treatment group: feather condition, fearfulness and walking ability.

The conclusion: installing UV lights in broiler farms could improve the welfare of indoor-reared broiler chickens.