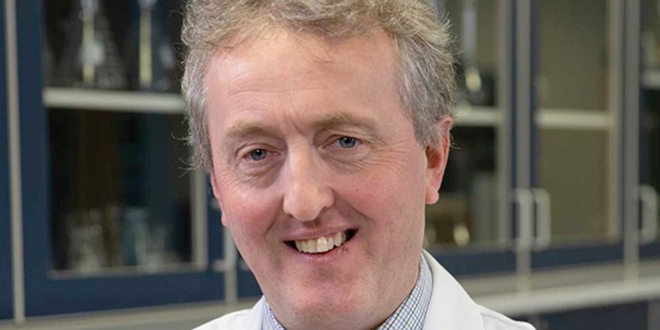 DR Richard Murphy, research director at the Alltech European Bioscience Centre in Dunboyne, Ireland will receive the Alltech Medal of Excellence during ONE: The Alltech Ideas Conference when the event returns to Lexington, Kentucky from May 19-21.

Murphy is receiving the award for his pioneering work in the areas of organic trace element assimilation, microbial enzyme technology and the mitigation of antimicrobial resistance in livestock production. The Alltech Medal of Excellence is Alltech’s highest distinction and is awarded annually to someone of great character and achievement.

Murphy’s nearly 20-year career with Alltech began when he received his PhD from the National University of Ireland, Galway after Alltech awarded him a research scholarship. He was under the tutelage of Dr Ronan Power, who is now vice president of Alltech Life Sciences, at the company’s original Alltech European Bioscience Centre, which Murphy has now led for 17 years.

His research has provided the basis for a revolution in animal nutrition, including several exciting developments in the industry. These include: the application of organic trace minerals and their potential to positively impact feed quality and decrease feed costs; the optimisation of solid-state fermentation systems by utilising microbial enzyme production, opening opportunities for new supplementation approaches; and a better understanding of the microbial factors that influence gut health, which has been integral to the development of novel strategies for mitigating antimicrobial-resistant bacteria.

The Alltech Medal of Excellence is awarded each year during the opening session of ONE. Previous recipients include the late Dr Pearse Lyons, founder of Alltech; George Blankenship, former executive at Tesla Motors, Apple Computer and GAP Inc.; former US Secretary of State Colin Powell; John Calipari, men’s basketball coach at the University of Kentucky; and Alan Mulally, former CEO of Ford.

“I’m very honoured to receive the Alltech Medal of Excellence, particularly given the calibre of previous recipients,” Murphy said. “Having been mentored throughout my career by two past recipients, Dr Karl Dawson (vice president and chief scientific officer at Alltech) and Dr Ronan Power, I consider myself lucky to have worked with such influential scientists, who have guided me through the many stages of my scientific adventures.

“I would also like to acknowledge the late Dr Pearse Lyons as absolutely instrumental in helping me achieve my ambitions and encouraging in me the scientific curiosity that he himself was known for and shared with us all.” During ONE19, Murphy will take the conference mainstage to speak about our understanding of the microbiome, how it functions and how we can better support it, which will have major implications for animal agriculture and human health.

Alltech’s flagship conference, now in its 35th year, is attended annually by nearly 4000 people from over 70 countries who gather to dream bigger and explore solutions to improve their businesses and the world around them. Singularity University Energy and Environment co-chair Ramez Naam will join survival expert Bear Grylls and best-selling business author Chris Zook as a keynote speaker at the conference.

Naam, who believes Earth’s greatest resource is human innovation, will discuss how technology is driving positive change and what we can do, right now, to get in on the action. Following Tuesday’s plenary session, ONE19 attendees will have the unique opportunity to join speakers for dinner as part of the ONE Table Talks.

Claim your seat at one of the eight dinners for an interactive discussion on global challenges and opportunities within the food and agribusiness industry. Learn more and register at one.alltech.com

Search
About This Site

This may be a good place to introduce yourself and your site or include some credits.