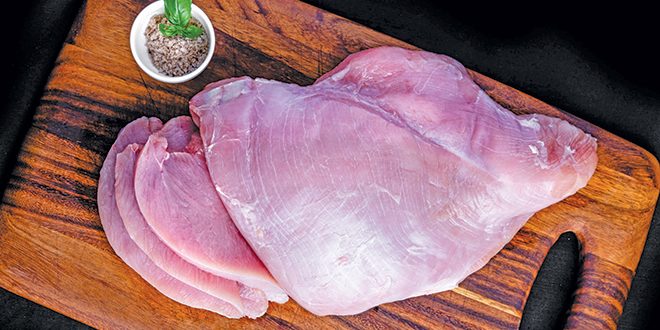 About half of fresh shop-bought chicken tested positive for food poisoning bug campylobacter in a year-long study. Dr Ihab Habib from Murdoch University worked with the Department of Health of Western Australia to test bacteria levels in raw chicken sold in supermarkets around Perth. Dr Habib said this was the first survey of its kind in Australia for almost 10 years. “We were testing for the bacteria campylobacter, which is considered to be one of the most frequent causes of gastro disease in humans, causing around 96 million cases worldwide each year.”

Australia has one of the highest rates of campylobacter infection in humans in the developed world, being around 10 times higher than the US and twice levels recorded in the European Union. The researchers tested a range of 315 raw chicken products purchased from supermarkets around metropolitan Perth over a year. Products from three of Western Australia’s major poultry suppliers available in the chilled delicatessen or self-service packs in supermarkets were tested, including a selection of free range produce.

The researchers examined a range of products, including whole chickens, wings, breast, thigh fillets and maryland leg quarters. “We found campylobacter in around half of the chicken tested and this level was consistent from chicken sourced from different suppliers,” Dr Habib said.

“Bacterial load was found in significantly higher levels in chicken with skin-on – maryland and wings – compared to fillet from chicken breast and thigh.

Dr Habib said that chicken meat is a very important component of our diet and provides a valuable source of protein, among many other healthy nutrients. However, consumers are reminded to follow good hygiene and cooking practices including: