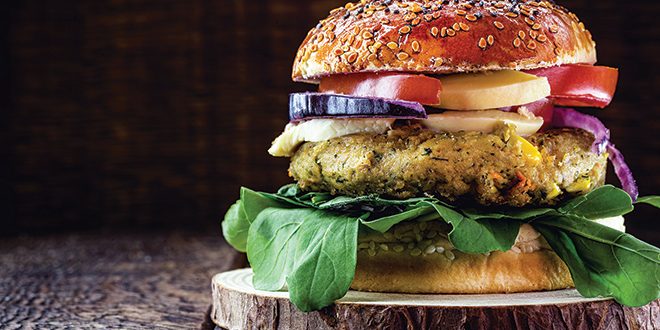 Veggie burgers aren’t new, but it’s only relatively recently that marketing of plant-based alternatives has shifted from targeting vegetarian consumers to targeting environmentally conscious meat eaters. Manufacturers of PBAs have not been shy in touting their products as disrupters and market leaders in terms of environmental impacts.

The manufacturers of Quorn claim that it has a “70 percent lower carbon footprint than chicken”, Sunfed chicken-free chicken is marketed as “healthier, both for you and the planet”, and choosing Beyond Meat over traditional meat products will reportedly “address four growing global issues – human health, climate change, constraints on natural resources and animal welfare.”  But do the claims stack up when they are compared to Australian chicken meat?

We investigated this and found many reasons to question the claims. First, claims are often vague. If a product is compared to ‘meat’, what meat is being referred to?
While some manufacturers have directly compared to beef – that is Impossible Burger – we found no studies that compared to Australian chicken.

There is a wide range of differences in the environmental impacts of the different meat types. In fact, chicken meat has a lower greenhouse gas impact than most other meats, so any comparison needs to take this into account before making a claim. To be meaningful, comparisons must liken apples with apples – if they’re not, they are potentially misleading.

Second, the comparisons are done in overseas markets, where impacts from chicken are typically higher than for Australian chicken, and where the impacts from PBAs are potentially underestimated if the emissions generated while transporting these products to Australia from the country of manufacture hasn’t been taken into account. While transport isn’t necessarily a large contribution, it all adds up.

Alternatively, if PBAs are produced in Australia then the specifics of Australian manufacturing and greenhouse gas from Australian energy sources needs to be taken into account.
These factors need to be considered to make a fair comparison for products on the Australian retail shelf.

Finally, for a typical portion size, the difference between chicken and a PBA is modest. Using information from the scientific literature, impacts from a pea-based product compared to Australian chicken meat were less than the emissions from driving a car about 1km. In the full gamut of available measures to reduce a person’s carbon footprint, there are many other factors far more significant than this issue.

This year’s Australia Talks research found that 79 percent of people believe it’s becoming more difficult to know which sources of information to trust. Perhaps it’s time to challenge misinformation that could mislead consumers, unfairly disadvantages Australian farmers and that are a distraction to making real change in sustainability.