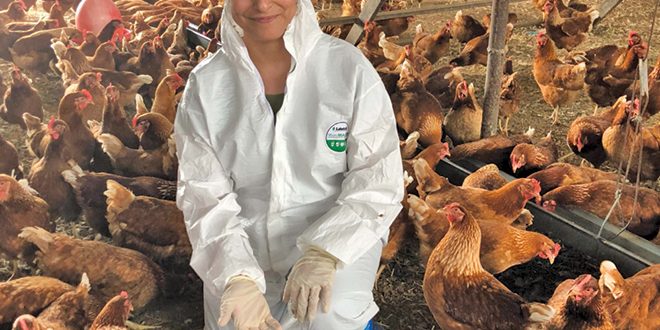 The access to open air and an outdoor lifestyle, which is a feature of free range chicken farming, may well be putting birds at a higher risk of an untimely death. Researchers have long understood that despite their more socially acceptable existence, free range chickens are exposed to more disease agents when compared to caged chickens.

Recently, new research established that pasteurella multocida – the bacterium that causes fowl cholera – is intuitive enough to switch on and off certain genes to outsmart vaccines, leaving free range chicken flocks exposed to the often devastating effects of the disease. The finding from Dr Lida Omaleki, a research officer based at the University of Queensland, also points to the need for whole-genome sequencing to help chicken producers identify changes in bacterial strains and better protect their flocks. The death of chickens is often the first sign that a flock is infected.

Chronic symptoms can include fever, loss of appetite, respiratory difficulties and a bluish discolouration of a bird’s skin, wattle and comb. Stresses such as fox or dingo attacks can also lower immunity levels, exposing the chicken to greater chance of infection. The responsible bacteria pasteurella multocida can also be carried and transferred to chickens from foxes, rodents and migrating birds.

Production levels in flocks for both meat and eggs are impacted after an infection of fowl cholera, which is less prevalent in chicken flocks held inside sheds because of the closely controlled environments and closer monitoring of animal health. Dr Lida Omaleki’s research at UQ is part of a Queensland Alliance for Agriculture and Food Innovation project co-funded by Australian Eggs and AgriFutures chicken meat program. Using genomic analysis, she has discovered why some vaccines were not proving effective against fowl cholera.

The most widely used form of vaccine to combat fowl cholera is a ‘killed vaccine’. Live bacteria are taken from the carcasses of an infected flock, grown in the laboratory and then killed, providing the basis for a vaccine to protect subsequent flocks on the same property. Dr Omaleki said the killed bacteria used in the vaccines for each farm should have the exact outer structure as the strain that produced the disease on that farm.

However, genomic analysis has illustrated the ability of the bacterium to evade vaccine induced immunity by changing the outer surface structure, including by switching genes on and off. The research shows that traditional bacterial analysis techniques are not specific enough to identify genetic variations in bacteria strains. Future analysis must use whole-genome sequencing to understand how pasteurella multocida responds to vaccine pressure.

“If we can understand the specific strains in certain flocks, we will be able to better guide vaccination programs as well as identifying where the strains are coming from, and perhaps introduce improved biosecurity practices to protect the chicken flocks,” Dr Omaleki said.

The findings from this three-year national project will allow Dr Omaleki and the research team at QAAFI to investigate ways to overcome this adaptive ability of pasteurella multocida – a mechanism that the bacterium uses to undermine the effectiveness of vaccines. A related pathogen, which causes middle ear infections in humans, has also been identified as having the ability to switch genes on and off, resulting in a change in bacterial outer structure. Dr Omaleki’s research findings have demonstrated the potential of a similar mechanism in pasteurella multocida for the first time.