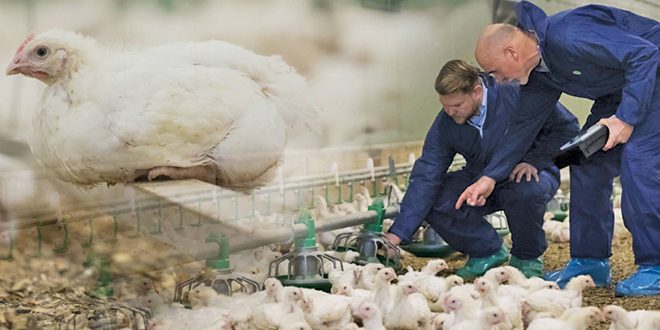 In Australia, meat chickens are not kept in cages and both male and female chicks are raised to produce meat. Most meat chickens are housed in large sheds – ‘barn raised’ – with some also having daytime access to the outdoors – ‘free range’ – once they are fully feathered. Traditionally, chickens have been raised in barren environments without the opportunity to express natural behaviours, such as perching, foraging and dust bathing. As chickens – even free range birds – will spend the majority of their lives inside, it is important they have a good indoor environment with perches, good quality litter and interesting objects to peck at.

Typically, chickens are kept in dim light for 23 hours a day to discourage movement and increase food intake to promote weight gain. This can lead to eyesight issues and poor leg strength. Poor quality and damp litter can also cause hock, breast and foot burns. The popularity of chicken as a diet staple for many Australians has meant that meat chickens have been bred over many generations to grow and gain weight very quickly.  This rapid growth rate, coupled with inadequate shed environments, can cause serious welfare problems for the birds, including leg injuries, fractures and joint problems.

The RSPCA believes meat chickens should be raised in environments that cater to their physical and behavioural needs and give them a good life. Housing environments for meat chickens should include perching, litter for dustbathing and foraging and enrichment in the form of objects and materials to peck at and play with. Meat chickens should also be provided with appropriate lighting, equivalent to natural light, with periods of both light and dark, so that the birds can rest properly.

In the short term, providing a shed environment in which birds are encouraged to move helps alleviate the health impacts of their fast growth rates. However, in the medium to long term, the RSPCA believes the industry must shift towards slower-growing meat chicken breeds to avoid the leg weakness and other disorders associated with fast growth rate.

To help improve the welfare of farmed chicken, the RSPCA actively engages in the Australian Animal Welfare Standards and Guidelines for Poultry farming processes, to advocate for the improvement of chicken welfare. Look for the RSPCA Approved logo on chicken in the supermarket and when dining out. The RSPCA Approved logo means the chicken meat has come from a farm where birds are raised according to the RSPCA’s detailed animal welfare standards.

Farms are visited regularly by an RSPCA assessor to ensure good animal welfare. More information can be found at rspcaapproved.org.au