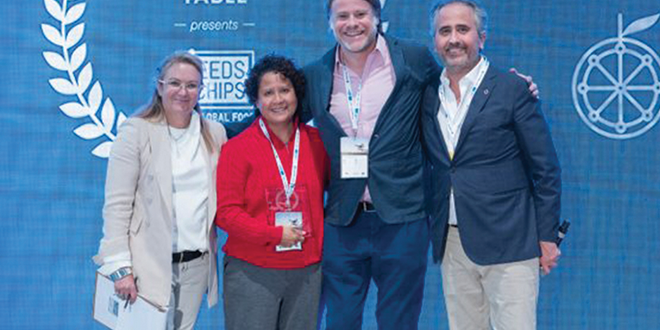 WITH more than 3000 attendees and a jam-packed program of exhibitors, speakers, young change-makers and more, Global Table set the bar high in its first year.

The first-ever Global Table concluded recently with a record-breaking 3037 people attending the event from 29 countries. This makes the event the largest of its kind in the Asia-Pacific region. Delegates included entrepreneurs, government, food companies, universities and more, with 150 invited buyers from 15 countries also attending.

After three days of conference sessions, pitch competitions and a trade show at Melbourne Showgrounds, the event fanned out across Victoria on the Friday for three site visits focused on innovative practices. A waste-themed tour visited Four Pillars Gin, where the distillery uses by-product to create new food products such as gin marmalade, before moving to Yarra Valley Water, which processes food waste to create energy.

Participants on a food innovation tour visited CSIRO and Monash Food Innovation Centre to see cutting-edge methods of delivering new products to market. The third tour took in the Centre for AgriBioScience research and the Government of Victoria’s On-Farm Internet of Things Trial. Former US Secretary of State John F. Kerry opened the event with a rousing keynote, followed by Dr Howard-Yana Shapiro of Mars Incorporated and Shama Sukul Lee of Sunfed on the following days. They were joined by more than 200 speakers from Australia and the world who shared their expertise on the biggest questions facing the food and agricultural sectors in 2019.

Seeds&Chips – The Global Food Innovation Summit came to Australia for the first time as part of Global Table, bringing its dynamic mix of speakers, young voices and interactive programming to Melbourne.Thirty young people between 13 and 19 years old – dubbed Teenovators – opened every conference session with a message of change for speakers and attendees, whether that was on climate change, plastic bags or bees.

Thirteen-year-old Bella Burgmeister from Western Australia said, “We are in a climate emergency and we must act now.” “We are looking for people to inspire us.” A highlight of the week, taking place in the middle of the conference floor, was Give Me 5!, a series of sessions that gave conference delegates five minutes to speak to leading figures including Secretary Kerry, Dr Shapiro, CSIRO scientist Dr Mary-Ann Augustin, government ministers and more.

The Give Me 5! conversations took place without microphones but in full view, with a clock counting down the five minutes. Anika Molesworth, founder of Farmers for Climate Action, 16-year-old beekeeper Luke de Laeter and entrepreneur Sam Duncan of FarmLab were among the participants. During the week, CSIRO, Mondelez International, Food Frontier and the Australian Department of Foreign Affairs and Trade all made announcements with exciting possibilities for the Asia-Pacific region.

Mondelez International is bringing its SnackFutures Hub to Australia and New Zealand to research and develop sustainable snack foods, while thinktank Food Frontier launched a world-first Deloitte Access Economics report that put a dollar amount on what the alternative protein industry could be worth to the Australian economy.

Thanks to growing consumer interest, the industry could generate up to $3 billion for the economy and create up to 6000 jobs over the next decade.
“The speed of change is faster than our response.” Dr Howard-Yana Shapiro’s opening line from his keynote on day two reverberated throughout the event, as people explored ground-breaking new ideas for retooling our agricultural systems. Five pitch competitions happened throughout Global Table, featuring closed-loop systems for greenhouses, solutions for remote communities struggling to access fresh food and more.

Successful startups in the competitions now get to participate in accelerator programs run by Beanstalk AgTech, FoodTech Accelerator (an initiative of Deloitte Italia) and Mondelez International. Elsewhere, the Trade Zone featured more than 100 export-ready Australian businesses showcasing their products to international buyers.

In the Innovation Precinct, an edible bug vending machine, robotics in retail, traceability solutions and VR were on show, as 60 startups took advantage of the chance to put cutting-edge solutions in front of influential investors and decision-makers. The event ended on a high with the presentation of 12 awards to standout innovations and ideas, as well as the announcement of the winners of the on-site pitch competitions.

Global Table will return to Melbourne in September 2020.