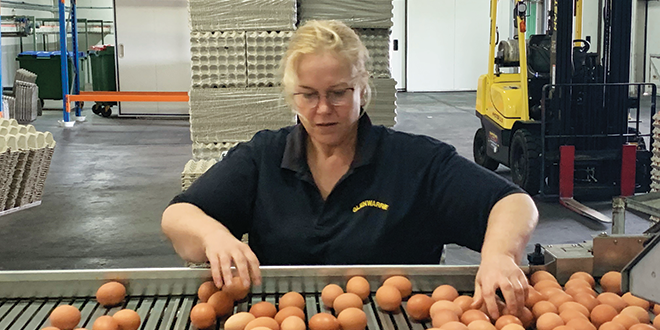 OVER the past few years, we have been reduced to virtual meetings, emails and relying on phone calls to speak with our members. Engaging with members

And while these methods have allowed Egg Farmers of Australia to function, there is nothing like being able to visit on-farm and begin engaging with members in person.

In conjunction with a dinner meeting in January, EFA staff visited Tamworth and were able to view Bede and Narelle Burke’s farm.

Not all farms have composting or use this in grain growing. 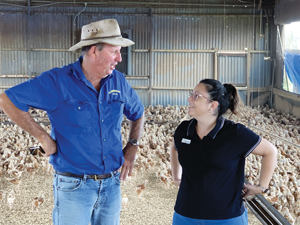 Bede Burke of Glenwarrie Eggs and Kylie Jackson from Egg Farmers of Australia.

It is great to see the variation in size, organisation and functions – as they differ between farms.

Towards the end of April, EFA staff visited Victoria to meet with the Victorian Farmers Federation and key representatives of the industry.

We also look forward to meeting those attending the Poultry Information Exchange in May, and Egg Farmers of Australia will have its May monthly meeting in conjunction with the event.

In June, we look forward to visiting the Australian Eggs team and a farm in NSW.

July brings the opportunity to meet with Western Australian farmers at the Sundowner event and in August, we will finally make it to South Australia for our Board meeting.

We have tried to get to South Australia for so long and to have this trip on the horizon is very exciting.

Animal Health Australia has meetings scheduled for September, and the end of the year will hopefully lead to strong egg sales into Christmas and January’s lunchbox season, as children return to school often with a boiled egg included in their lunchboxes.

Thank you to all our members and stakeholders who have worked closely with us over the past couple of years.